Free Things to See in Hue Vietnam, That Should Not Be Miss

Free Things to See in Hue: The Former Capital of Vietnam is rich with History, Culture and surrounded by Royal Tombs, Imperial Citadel. There are plenty of Things to Do and to See in this beautiful city, and here is the list of Free Things to see in Hue:

1. Dong Ba Market: Dong Ba market built under King Gia Long was located outside Chanh Dong gate (Dong Ba gate). After the incident of the imperial city of Hue, 1885 markets were destroyed by the French colonialists. In 1887, the king of Dong Khanh rebuilt it to name Dong Ba. In 1899, King Thanh Thai moved Dong Ba market to its present location.

Over time, Dong Ba market has been repaired many times with an area of 47,614m2 from Gia Hoi bridge to Truong Tien bridge, on the one hand is Huong river, on the other hand is the main street Tran Hung Dao, Dong Ba market has a three-floor structure. with thousands of shipments to meet the circulation needs of the people.

2. Thien Mu Pagoda: Built in 1601 on the order of the first Nguyễn lords, Nguyễn Hoàng, who at that time was the governor of Thuận Hóa (now known as Huế). The Nguyen Lords were in name, officials of the ruling Lê Dynasty in Hanoi, but was the de facto independent ruler of central Vietnam. 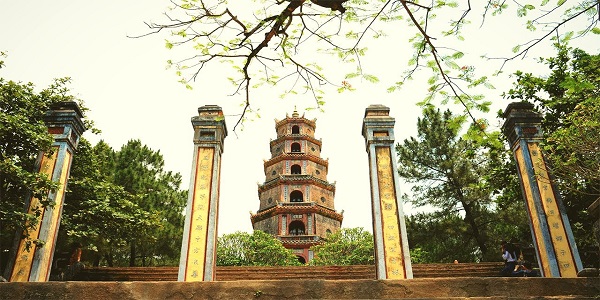 According to the royal annals, Hoang while touring the vicinity, was told of the local legend in which an old lady, known as Thiên Mụ (literally "celestial lady"), dressed in red and blue sat at the site, rubbing her cheeks. She foretold that a lord would come and erect a pagoda on the hill to pray for the country's prosperity. She then vanished after making her prophecy. Upon hearing this, Nguyen Hoang ordered the construction of a temple at the site, thus the beginning of Thiên Mụ Pagoda.

3. Thanh Toan Covered Bridge: The bridge was recorded in 1776, because a niece of the sixth generation Tran, Tran Thi Dao, offered money to the construction village, to facilitate the passing of the villagers and to be a place for the traveler, other people stop their feet. 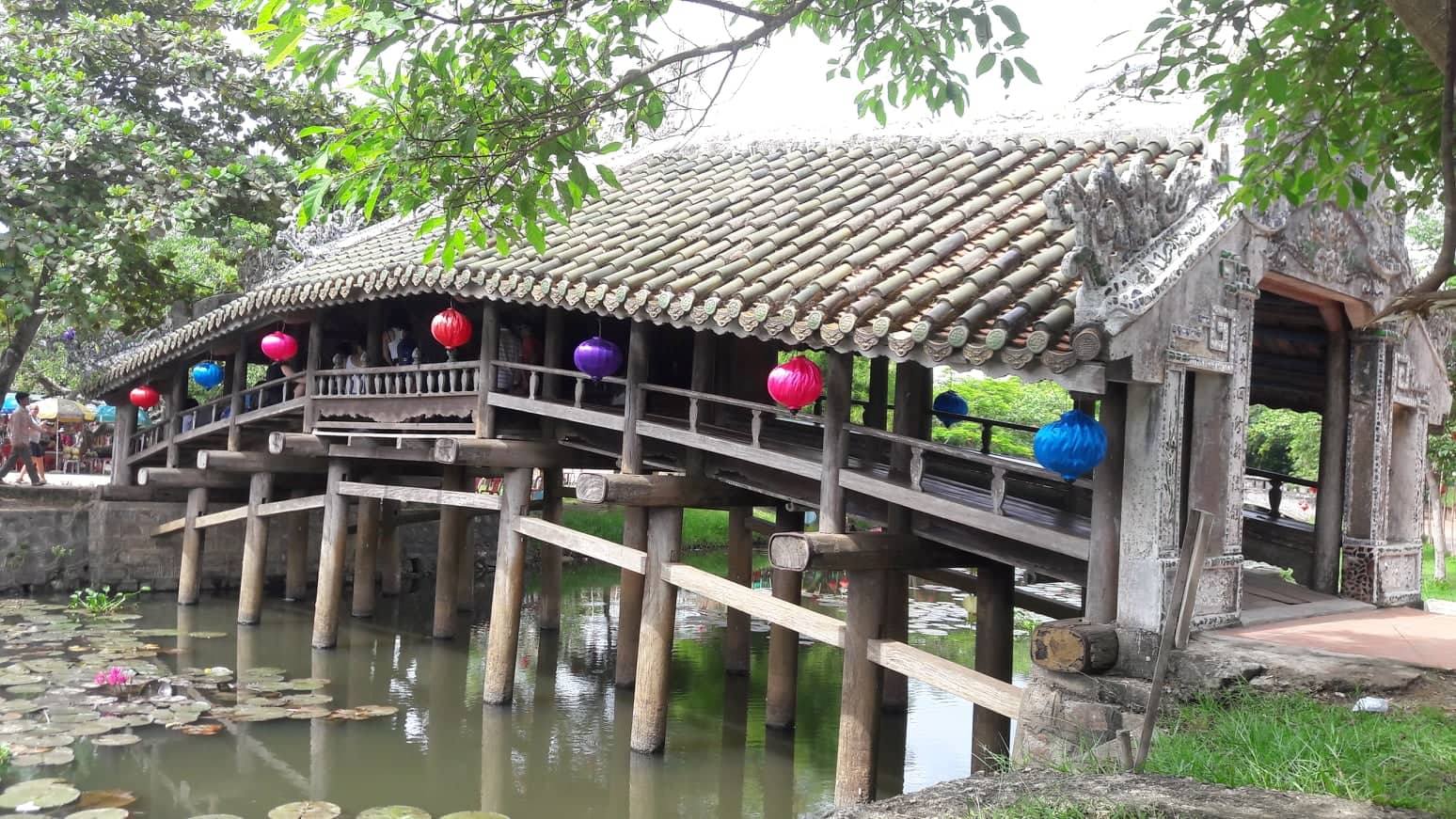 In 1925, Emperor Khai Dinh also granted her the title Tran Duc Bao Trung Hung Linh and ordered people to set up an altar on the bridge to worship her.

4. Stading Lady Buddha Pagoda: Calling Standing Lady Buddha Pagoda because on a winding road to Thuy Bang commune, it is easy to see in the middle of Tu Tu mountain a very high statue of Quan The Am, standing in the middle of the forest, the sky is blue with a gentle face virtue Known about history, the statue was built in 1968, when the war won independence, unified the country took place fiercely, Tu Tuong mountain was also the place where frequent great battles occurred. 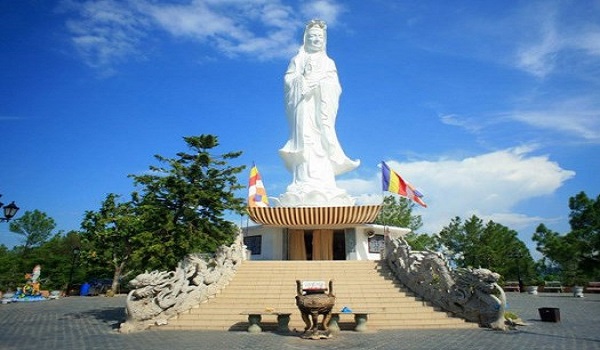 But according to the people here recounted, there is often a sacred story "Bodhisattva Avalokitesvara," which helps the soldiers and the people here to be at peace. Thanks to that, Buddhist Thua Thien Hue Buddhist leaders Thua Thien Hue built a statue of Bodhisattva Avalokitesvara on Tu Tuong Mountain. Since then, people often visit, incense smoke for Quan The Am statue.

5. Tu Hieu Pagoda: In 1843, after resigning "Tang Cang Giac Hoang Quoc Tu" and giving the right to administer Bao Quoc temple to the disciples, Nhat Niem and Nhat Dinh Venerable came here to paint and build "Thao Am An Duong" to purify it and nourish the old mother. 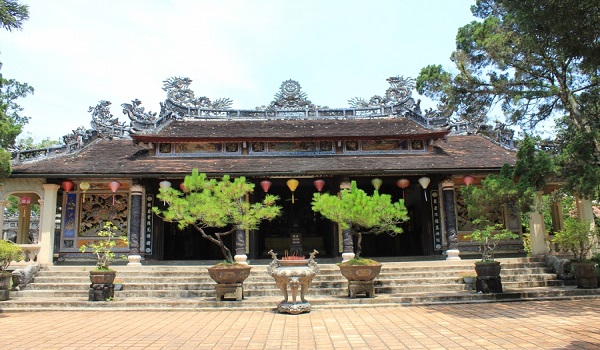 Most famous Monk Nhat Dinh is famous for having a fondness, and it is said that once his mother was very sick, he took care of his mom every day, but she still could not get better. Some people advised him to buy more fish & meat to get her recover. After listening to this, despite the humiliation of people, the Zen monk walked down the market more than 5 km away to buy fish to cook porridge for his mother to eat. The story came to the ears of Tu Duc which was a very filial king to his mother, the king was very impressed by the heart of Nhat Dinh, so he bestowed "Sắc Tứ Từ Hiếu". The pagoda was named after Tu Hieu.

6. Chin Ham Historical Relic: Nine Bunker area belongs to Ngu Tay hamlet, An Cuu village, Thuy An commune, Hue city, about 6km from the city center to the southwest, at the foot of Thien Thai mountain. Called Nine Hamlets but actually only 8 tunnels and 1 guarded house. This is a treasure trove of war weapons materials built by the French army in 1941. From 1954, Ngo Dinh Can used this place to confine the Communists and some Hue people struggled against the dictatorship of the Ngo family. These tunnels are also known as tiger cages, in the cellar divided into 2 rows of tiger cages, each 0.9m wide, 0.2m long, 1.5m high above the head is an iron net, each has 1 Small vent.

7. Vong Canh Hill or American Base (Đồi Vọng Cảnh): Hue is famous for many natural landscapes, including Vong Canh hill, located in the south of Hue city. Vong Canh Hill is considered as a park for strolling, sightseeing, relaxing activities combined with road and waterway tours along the Huong River for city residents and tourists from near and far. If you have the opportunity to visit Hue, visitors remember to come to Vong Canh hill. 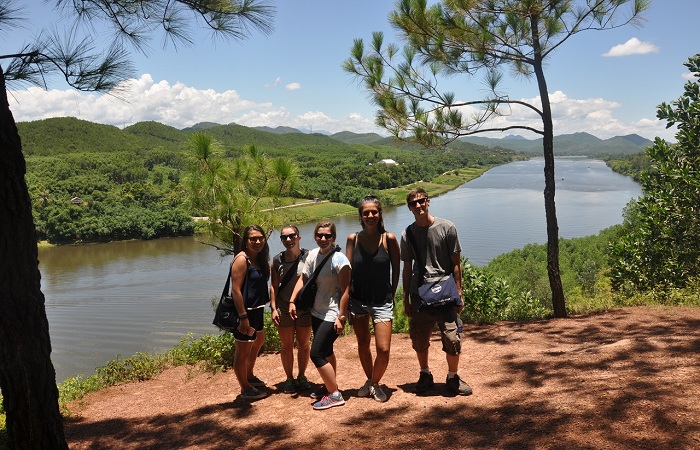 This place is also a popular destination for tourist as it is known as Former American Base, where US Army based during the Vietnam War. Rent a Motorbike or Bicycle to get here by yourself or join popular Daily Hue Motorbike Tour to discover this.

Free Things to See in Hue Vietnam, That Should Not Be Miss