Learn about Life of Eunuchs in the Nguyen Dynasty of Vietnam

Eunuch is a man who has been castrated. Throughout the history, they usually served a specific social function. The earliest records of intentional castration to produce eunuchs are from the Sumerian city of Lagash in the 2nd millennium BC. Over the millennia since, they have performed a wide variety of functions in many different cultures: courtiers or equivalent domestics, for espionage or clandestine operations, tenor singers, concubines, or sexual partners, religious specialists, soldiers, royal guards, government officials, and guardians of women or harem servants. 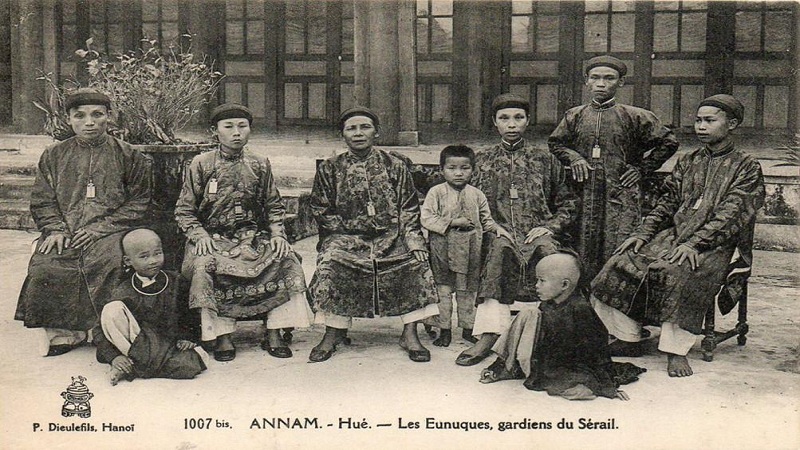 In the Book “Imperial life in the Nguyen Dynasty”, and the book “Life in the Forbidden City”, author Ton That Binh said that under the Nguyen Dynasty, the main task of the eunuchs (depending on the position and hierarchy) was to organize the court, serving the king (along with the female officers working under him); do things related to the king's sex, such as arranging the time and date Kings met the royal concubines, recording the name of the royal concubine, which the king had recently sex, so that if ladies had children for the Kings.

In addition, they also served widows and concubines in the King's mausoleums. As after the King died, all of the King's wives and concubines, who had no children for the King, had to move to live and look after King's mausoleums for the rest of their life and never return home. The number of eunuchs per king varies, during King Tu Duc's time there were about 60 people.

Selection and decentralization of Eunuchs:

The teenagers who were castrated from a young age and then put into Imperial City. These people were mostly in difficult situations. Being recruited into the palace to be eunuchs, the family will have many material benefits, parents will be supported by the state. In addition, during the great ceremonies at the Nguyen court, the eunuch was also rewarded with money, cloth ... like the others in the inner palace.

Eunuchs and Female Servants in Imperial City of the Nguyen Dynasty

In the 5th year of Minh Mang (1824), the King granted the communal house to impart only the counties of Bắc Thành, Thanh Hóa, Nghệ An and Ninh Bình. In the host villages, boys from 13 years and older, 65 and younger, whoever was borned with defect in the genitals, then taken to the local officials to verify the authenticity, and then taken to Imperial City to become Eunuchs.

In the 16th year of Minh Mang Kinh (1836), King ordered Government Officials to look for “Borned Eunuchs”, regardless of old and young, they must be taken to Imperial City. If the intention is hidden, it will be found guilty. (Some other documents show that the recruitment of eunuchs until the time of King Bao Dai has ended).

Regarding caste, the Nguyen Dynasty also set the eunuchs with the rank. According to the book of Dai Nam Luc Luc, in the 17 th year of Minh Mang (1836), the king gave an example, dividing eunuchs into 5 equations, including eunuchs' administration, the eunuch dictionary, which were equals; inspection of eunuchs, eunuch rituals are secondary, excess of eunuchs, classical eunuchs are all equal, palace of eunuchs, eunuchs of eunuchs are equal, eunuch serve, euthanasia director is inferior. Re-regulating the salary and rice for each class.

Lonely when alive and even more lonely when dead:

The life of the eunuch was to suffer the lifetime of a servant in the palace, must also suffered the fate of gloomy loneliness in life and in death. The body is different from a normal person, some eunuchs have different gestures, voices, and personalities than their age and gender. They are also lonely and also need to come together for forgiveness. So there was the case of the eunuch getting married, not to solve the physiology, but to have a chatter about sadness and the joy of their life.

Because there were no children to continue the lineage and worship after death, the eunuchs contributed money to repair Tu Hieu pagoda in 1893. This temple, in 1843, was under the reign of Thieu Tri, a eunuch named Chau Phuoc Nang raised money to restore. The French call this Eunuchs Temple. 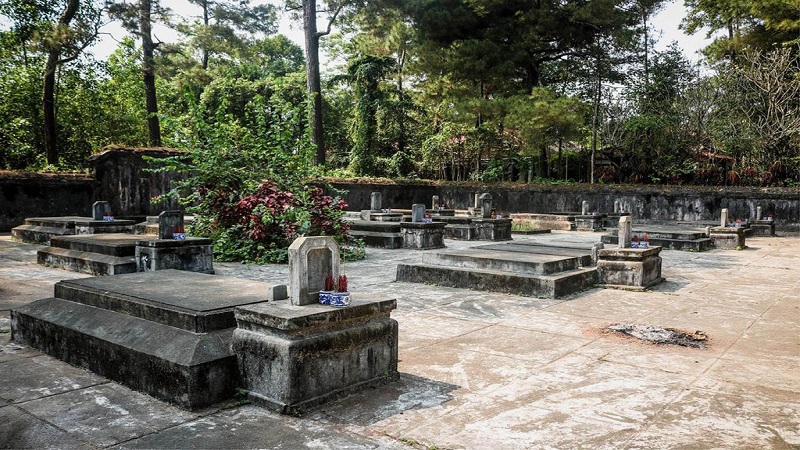 Tombs of the Eunuchs in Tu Hieu Pagoda - Hue City

Author Ton That Binh said that maybe during their time in Forbidden City, eunuchs could not have peace and serenity in their souls, so when they finally returned to Tu Hieu pagoda, they felt secure. So the stele erected at the new temple has the following content: “In life we find peace. When we were sick, we retreated here. When we died, we were buried here. Whether we live or die, we still find rest in this place”.

Currently in the garden of Tu Hieu temple, there are still deserted tombs of more than 20 eunuchs. They rely on the Buddha's door to receive annual incense sticks and death anniversaries in the special days.

Learn about Life of Eunuchs in the Nguyen Dynasty of Vietnam