An Bang Cemetery - Tomb City of Ghosts in Hue Vietnam

An Bang Cemetery - City of Ghosts is located in An Bang Village, Phu Vang district of Thua Thien Hue province in Central Vietnam. This cemetery with hundreds of huge, colored tombs/mausoleums of all shapes. An Bang is a tranquil village near Thuan An Beach, about 20 kilometers East of Hue City. Therefore, the local people call it City of Ghosts.

In a bizarre variation of keeping up with the Joneses, the villagers compete to build increasingly lavish and elaborate tombs for their ancestors. And, even sometimes for family members who have not yet died. The cemetery, with its brilliantly colored structures built on white sand. It stretches along the side of the road for 3 kilometers length. Some of the mausoleums could be a mistaken for mansions. Regal stone lions abound and glittering mosaic dragons adorn the roof-ridges. Some 90 percent of the villagers have overseas relatives. They send money home and much of these money are only to build tombs. Some grave markers write information on the building costs plus the names and dates. Typical figures are between twenty-five and fifty thousand US dollars. Although, the homes of the villagers remain humble, the dead are resting in luxury place.

Several researchers of Hue civilization suggest the idea to flip An Bang cemetery to a tourist site several decades ago. Notably is Nguyen Huu Thong, director of the Institute for Vietnamese Culture and Art in Hue city. According to Thong, An Bang cemetery is worthy of being a Hue tourist site due to its own uniqueness in culture and architecture. 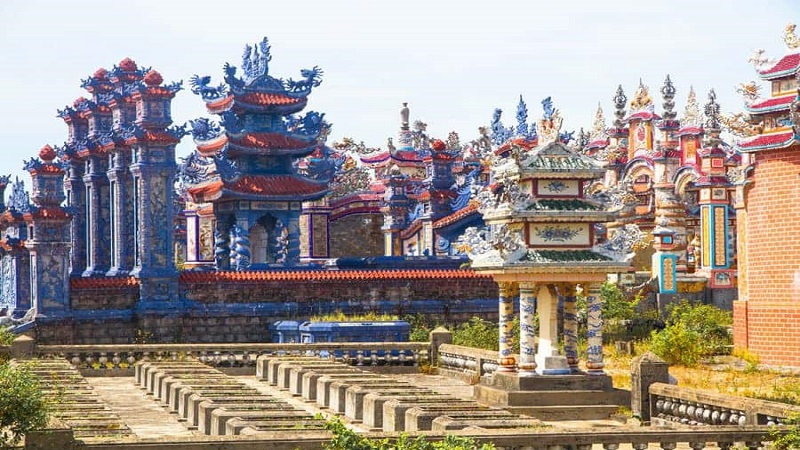 Factually, tombs in this cemetery have in various styles: Buddhism, Taoism, Catholicism, Vietnamese, Chinese and Western & hellip. Notably, many tombs in An Bang are the duplicates of Nguyen Kings graves and Hue Royal Citadel. Many distinctive Traditional crafts in Vietnam restored thanks to this City of Ghosts. For instance, making dragons, phoenixes by bits of glazed terra cotta and potteries on walls, etc.

History of the town of ghosts in Hue began in the early 1990 when An Bang was a small fishing village. However, in 1990, when the State started to allow Vietnamese people residing in the US to send money to assist their families in Vietnam. The village has changed rapidly. Life improves and individuals here also don't forget to modify, to fix the ancient tombs of the ancestors. Therefore, in 1991, we suddenly started to see the appearance of the larger and rather magnificent tombs. Even, many graves are also lit with toilets. In accordance with the elders of the village, majority of the tombs in the town of ghosts in Hue took the design of the mausoleum of King Khai Dinh. Then, they give or take in accordance with the personal preferences of every owner. There are very different patterns. According to Mr Dang Van Tam being 79 years old, the town of ghosts has a region of over 40 hecta. This village has a total of 44 lineages with almost 500 years history.

The tombs here constructed with the descendants contribution. Mr. Tam said Mr. Ho Thiet, 80 years old, who specializes in the rituals of the villagers, educated: the village of An Binh has about 3, 000 tombs. The normal cost of every tomb is about 30, 000 USD. The Truong lineage's graves are the most costly and larger in this town of ghosts in Hue: A grave costs 50, 000 USD.

These graves in Hue have it all types of Buddhism, Christianity, Taoism, Islam. Which were assembled from the money of overseas kids to express one's filial piety to ancestors. Because of the dearth of neighborhood planning, there are many tombs covering a thousand sq meters for every. And in a short time, the sand dunes have been covered from the graves. Infact, the graves surround the home of the inhabitants now. The town of the ghosts no longer has the border between the living and the dead. Even, the colossal tombs are made before departure. 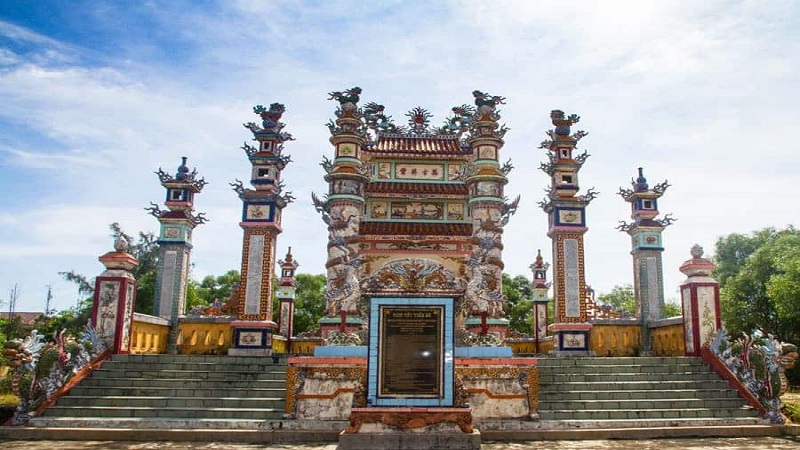 In this "realm of the earth", it is normal for someone living in front of a piece of land to build a grave for themselves. In An Bang there is a custom, that is after a person died, if within 50 days can not build tombs, it must be after 3 years can build teh tomb. Therefore, the family built their own tombs for themselves and for others in the family before die. The tombs extend, spreading even the roads along the village. The richness of the tomb seems to be more of a concern than the problems of the living. Mr Nga - a senior here shared with us: "Many of the mausoleum here is lighted up at night". And the story of building a tomb several billion is quite normal.

Not only building a few billion, the house also spacious with some grave matches. "Seeing that we don't believe in his story, he leads us to his home to see by our eyes " When we arrived, we were amazed at the richness of the people here. The house is about 400 m square, all the columns are made of solid stone, the whole ceiling is covered with natural wood. According to Mr Nga, the total cost of this house is about 4 billion dong. But the house is also about to be inhabited by people who will go abroad. "At the end of the year, we must also gave people money for them to live in, because my family also went abroad."

As a result of this richness, according to the people here, the village youth mostly do not have to work, and in the afternoon to focus on drinking alcohol. And the people here have a comfortable life, no worries. The fishing is probably the past, the boats, the ships are now lagging behind the white beach next to the magnificent tombs.

It's will be wonderful Vietnam travel experience if you could spend time to visit this place. Because not many tour operator in Vietnam can organize this trip. So the best way is to Contact Adventure Journey.

An Bang Cemetery - Tomb City of Ghosts in Hue Vietnam