Thien Mu Pagoda (Pagoda of the Celestial Lady, or Linh Mu Pagoda - Chùa Thiên Mụ) was built in 1601 by the Founder of the Nguyen Family in Central Vietnam. Before the time of setting up Thien Mu Pagoda, there was a pagoda named Thien Mo or Thien Mau on the hill of Ha Khe, which is a Cham temple. Thien Mu Pagoda is a famous religion spot in Hue, and was built there because of a dream of local people. 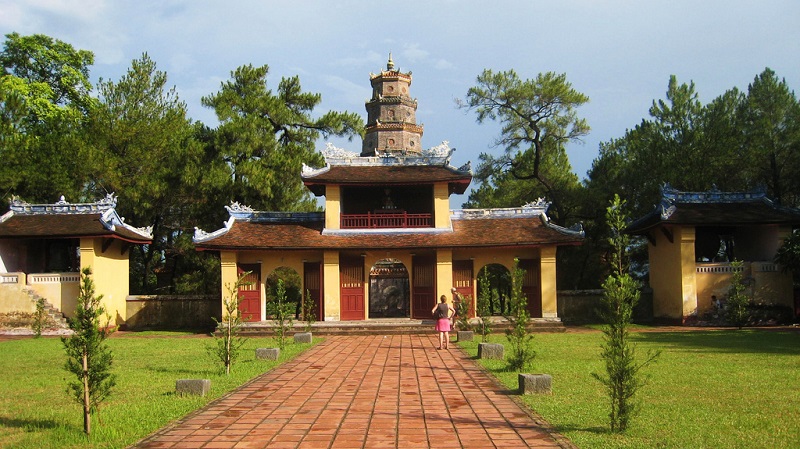 Legend said that, when Lord Nguyen Hoang came to be the governor of Thuan Hoa (Thua Thien Hue Provice today), he personally went to examine the terrain here in preparation for a scheme to expand the territery. In a horse hike along the Perfume River, he encountered a small hill jutting out of the meandering blue water, the hill looked like a dragon looking back, this hill had its name Hà Khê hill.

Local people said to him that there was usually an old lady appearing on the hill at night, telling people: "there will be a Land Lord to come and build the temple to gather spiritual energy, to make it durable. and make the South strong country". Therefore, this place is also known as Thien Mu (Lady from Heaven). 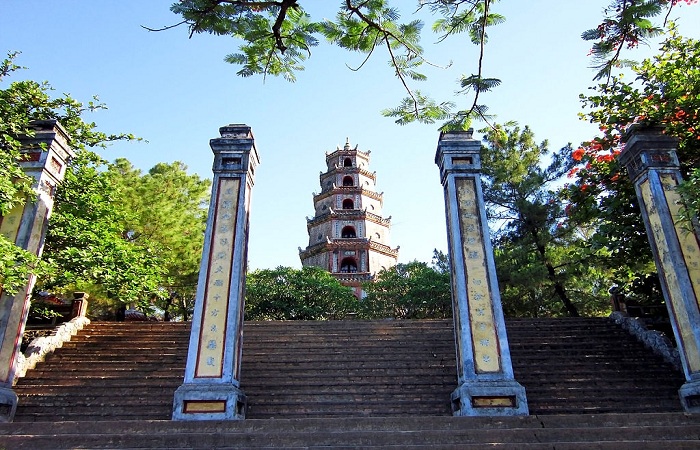 The great thought of Lord Nguyen Hoang seems to keep pace with the wishes of the people. Nguyen Hoang was very happy. In 1601, he satrted a temple on the hill, turned to face the Perfume River, and named it "Thien Mu".

Based on the legend, at the same time, based on the shape of the Chinese characters that were written on the cover of documents made of many materials, it is affirmed that in the name of Thien Mu, the term "Thien" means "Heaven".

In 1862, under King Tu Duc, in order to pray for a son to succeed the offspring, the king was afraid of the word "Thien" to violate Heaven, so he changed the word "Thien Mu" to "Linh Mu".

The problem of abstinence as mentioned only takes place from the year of the Dog (1862) to the year of the Snake (1869). After that, people freely called two names: Thien Mu Pagoda and Linh Mu Pagoda.

Because the word "Linh" is synonymous with "Thiêng - Sacred", the Hue pronunciation when saying "Thiên" sounds like "Thiêng" so when the Huế people say "Linh Mụ", "Thiên Mụ", the listeners all understand is referring to this temple.

Thien Mu Pagoda was officially founded in Tan Suu (1601), the reign of Tien Lord Nguyen Hoang. Under the reign of Lord -Nguyen Phuc Chu (1691-1725) following the development and prosperity of Dang Trong Buddhism, the pagoda was rebuilt with more constructions. In 1710, Lord Nguyen Phuc Chu cast a large Great Bronze Bell, weighing over two tons, called Dai Hong Chung, with a card engraved on it. 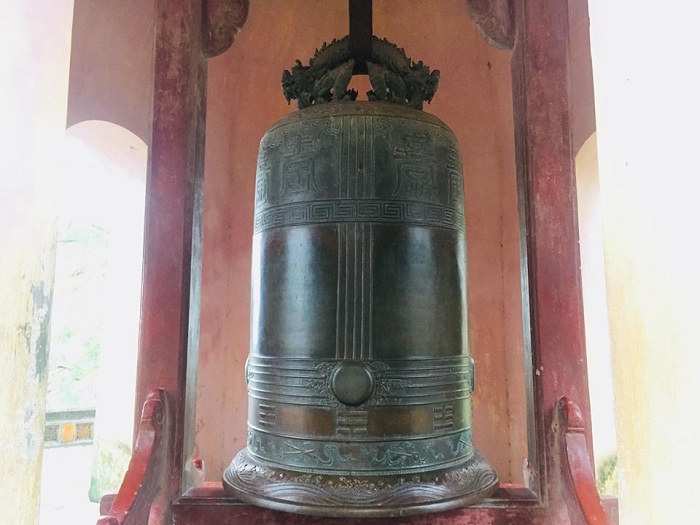 By 1714, Lord Quoc again restored the pagoda with dozens of very large architectural constructions such as Thien Vuong palace, Dai Hung palace, Dharma preacher, Tang Kinh floor, Sangha room, Zen house ... but many works among them are no more today. The Lord also personally wrote an article, carved into a large (2m60 high, 1m2 wide) talking about the construction of architectural works here, allowing people to go to China to buy more than 1,000 Buddhist sets to put on the floor. Tang Jing, praising the philosophy of Buddhism, clearly shows the legend of Venerable Thach Liem - a person who had great merit in helping Lord Nguyen revive Buddhism in Dang Trong. Beer is placed on the back of a very large stone turtle, simple but beautiful decoration. 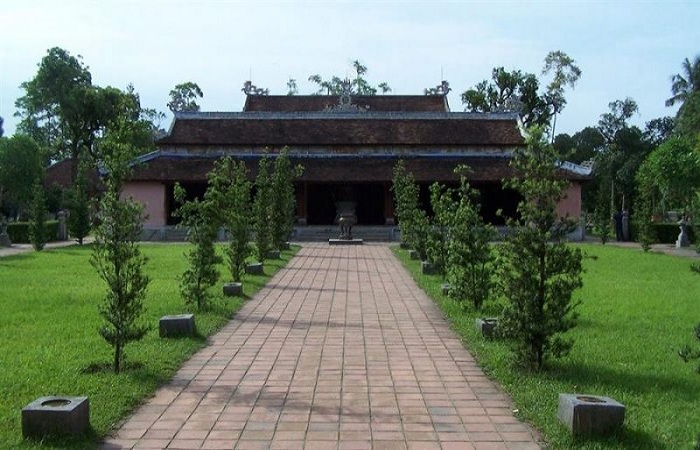 With natural beauty and scale expanded from that time, Thien Mu Pagoda has become the most beautiful temple in Central Vietnam. Experiencing many historical events, Thien Mu pagoda was used as an altar of the Earth under the Tay Son dynasty (about 1788), then restored and rebuilt many times under the Nguyen Kings (1802-1945).

Phuoc Duyen Tower is a famous symbol associated with Thien Mu Pagoda. The 21-meter-high tower, consisting of 7 floors, was built in front of the temple in 1844. Each floor has Buddha statues. Inside, there is a spiral staircase leading to the top floor, where there used to be a golden Buddha Statue. In front of the tower is Huong Nguyen communal house, on the roof of the Falun (wheel of Dharma, Buddhist symbol). 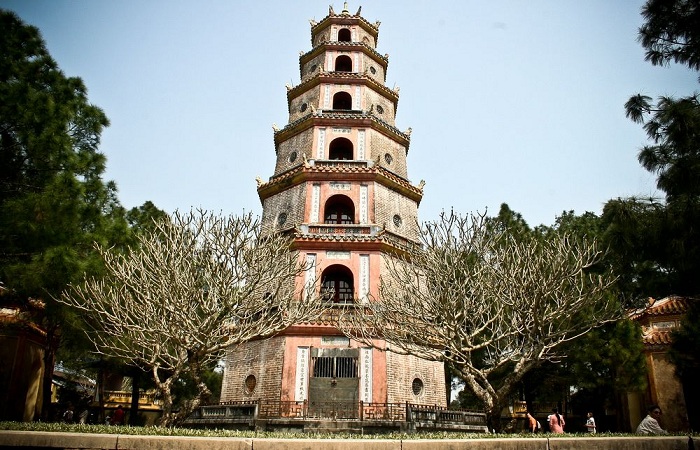 The storm in 1904 destroyed the temple. Many constructions were also damaged, in which Huong Nguyen temple was completely collapsed (there are still traces). In 1907, King Thanh Thai rebuilt it, but the pagoda is no longer as big as it used to be. On both sides of the tower are two quadrilateral houses, with two steles of Thieu Tri life. Deep inside are two hexagonal houses, one for beer and the other for bells casting the life of Lord Nguyen Phuc Chu.

Through many renovations, large and small, in addition to architectural works such as Phuoc Duyen tower, Dai Hung Palace, Quan Am Palace ... with stelae, bronze bells, Thien Mu Pagoda today is also a place with many Precious antiques are not only historical but also art. The statues of Dharma protectors, the Ten Kings statue, Buddha Maitreya statue, Tam The Buddha statue ... or the diaphragm, the couplets here all mark the golden history of Thien Mu pagoda. 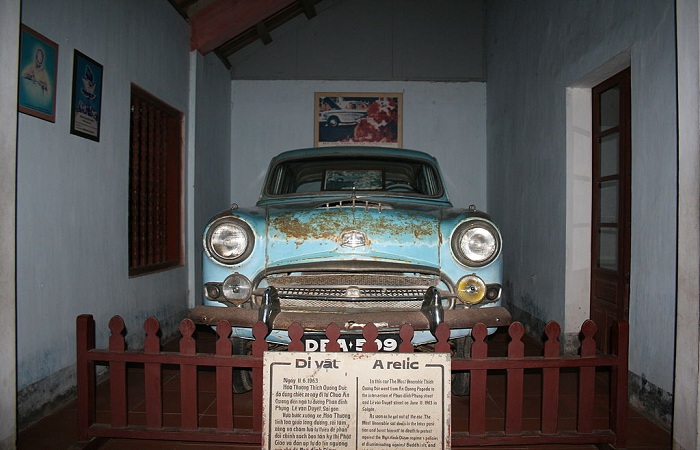 Within the campus of the temple is a garden of grasses tended and cultivated daily. There, the rockery of the Vietnamese opera master, Dao Tan, was placed near the car - relic of the late Venerable Thich Quang Duc before setting himself on fire to burn himself to protest the persecution of Buddha. education of Ngo Dinh Diem regime in 1963. 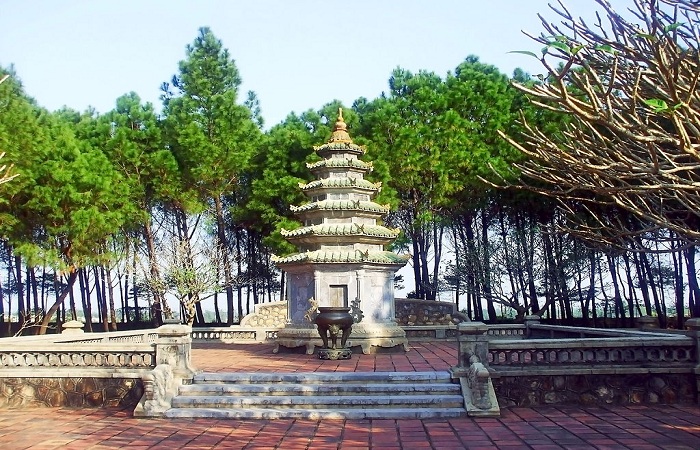 At the end of the garden is the tomb tower with 6 floors of the late Venerable Thich Don Hau, the famous monk of Thien Mu Pagoda, who has devoted his life to philanthropic activities. This tomb was built with 6 floors, as according to Buddhist people, only the most vulnerable monks got buried under 6 floors tower as not 7 floors towers are just for Buddha.

How to Get to Thien Mu Pagoda in Hue:

Distance to Thien Mu Pagoda is only 5km away from Hue City center. You can get there easily by Dragon Boat (from Toa Kham Boat Station, cost around 10$/Boat), rent a bicycle, or taxi, rent a motorcycle (self-driving or with driver) to drive here. Book a Private Car with Driver is also another option for you.