Tu Duc Tomb (Mausoleum of Tu Duc): Emperor Tu Duc ruled our country for 36 years (1847-1883), the longest time compare to any Emperors of the Nguyen's Dynasty. Although he had about 103 wives and concubines, but he was unable to have children as he had mumps when he was 20. Then he had to adopt 3 nephews to become adopted sons. He had wrote about his biography on Stone Stele in Tomb's Area. This stele is the biggest of its type in Vietnam with 20 tons weight, and had to be brought here from Thanh Hoa Province over 500 kilometers North of Hue - a trip that took Elephants and Horses four years to bring here. Tu Duc Tomb took 3 years for 3.000 man to construct day and night. 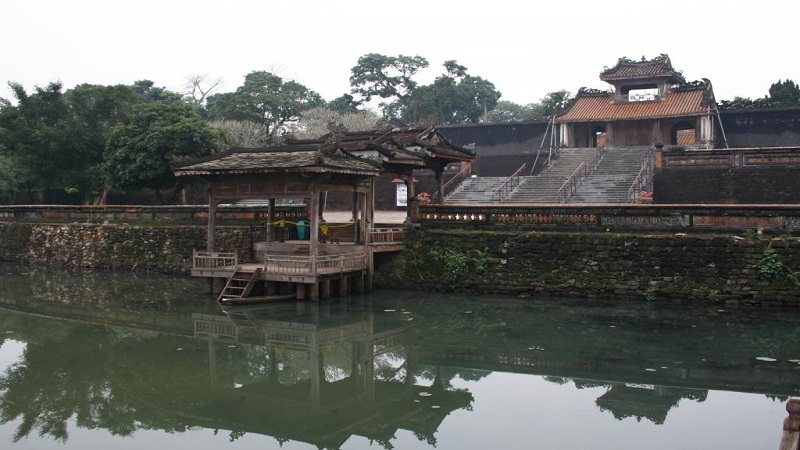 Tu Duc started his tomb long before die in 1883. The major area of the tomb were built from 1864 to 1867, along with future temple buildings that used as a royal palace for Tu Duc and his wives when he was still alive. Construction of the tomb needed too much labor and hearvy tax that there was an abortive coup against Tu Duc in 1866.

Amenities for King's living are different to any other tomb in all over Vietnam. Here, the Emperor could enjoy boat trip and poetry on the lake, hunting on the tiny island in the middle of the lake. He could also enjoy performace in Xung Khiem Pavilion with his concubines. After Boat Trips and Hunting on the lake, the boats could moor at Pavilion of Du Khiem, from here the Emperor and his entourage could walk directly west into the palace area of the tomb.

After Tu Duc died in 1883, his adopted son - Kien Phuc took over as the new Emperor. But beecause Kien Phuc ruled the country only seven months before he was poisoned to death, so tomb was not built for him. Instead, he was put in a small corner of Tu Duc's tomb. Between 2 tombs of Tu Duc and his son Kien Phuc is the tomb of the Empress Le Thien Anh - A primary wife of Tu Duc.

Despite this was planned as a Tomb for Tu Duc, but infact he was buried in a different, secret location in Hue. To keep the area secret for the King, over 200 laborers who built tomb and buried the king were all forced to die in the secret route. Up to this day, the real tomb of Emperor Tu Duc still remains hidden.