Duc Duc tomb (Mausoleum of Duc Duc), named after An Lang, is a relic in the ancient ruins of Hue, where is the burial place of King Duc Duc, the fifth king of the Nguyen Dynasty. The mausoleum is located in Tay Nhat village, An Cuu village, formerly belonging to Huong Thuy district, now in An Cuu ward, Hue city, less than 2 km from the city center. 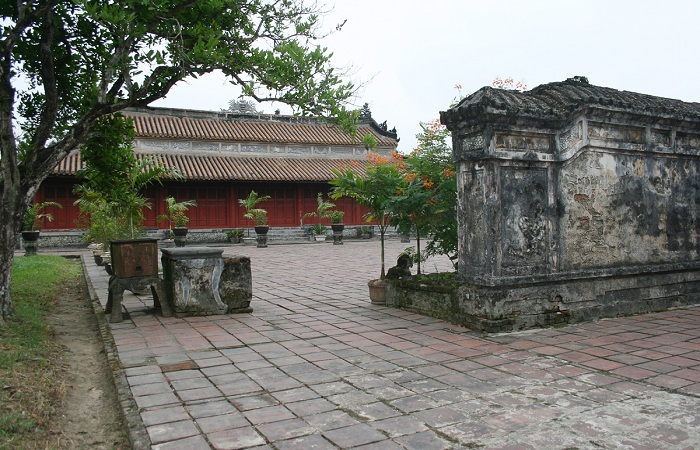 The concept of the Duc Duc tomb is currently used to refer to the entire architectural complex located in an area of nearly 6 hectares, including the Emperor Duc Duc tomb, the queen and 42 tombs of the royal princes.

An Lang is located in the central area, an area of about 1ha. The tomb consists of 2 areas: the tomb area and the worshiping area are placed parallel to each other. Both areas have surrounding walls. The mausoleum faces the northwest, taking Phuoc Qua hill as a front screen, the Tam Thai mountain behind it as a Hậu Chẩm. (Hậu Chẩm - a solid support. Again, there must be a long vein, usually a river, or a long lake or pond, the dragon vein must always be opened to keep the prosperity), and the stream flows around in front to clear the waterway.

Emperor Duc Duc, whose real name is Nguyen Phuc Ung Ai, was born in 1852. 2 years later, he was adopted by Emperor Tu Duc and made Duc Duc Duong in the imperial city. At 17, he was renamed Ung Chan. When King Tu Duc passed away, the 32-year-old eldest son ascended the throne. But after only 3 days he was deposed (July 23, 1883) and detained at the Institute of Medicine, eventually starving in the Thua Thien prison after 7 days without eating and drinking (6-10-1883); leaving 8 wives, 11 sons and 8 daughters.

Temporarily buried tomb in Phuoc Qua islet, near Tuong Quang pagoda. A few days later, the court allowed his wife, Mrs. Tu Minh, to visit the tomb and perform a funeral at Tuong Quang Temple. The son of Emperor Duc Duc, Nguyen Phuc Buu Lan, was crowned king in 1889, with the title Thanh Thai. After ascending the throne, Thanh Thai immediately built a tomb of a proper king and named it An Lang. The place of worship is Tuong Quang pagoda 200 meters away.

In 1891, the Imperial Court of Thanh Thai built a temple in Thuan Cat Ward, near the Imperial Citadel to worship Duc Duc King, named Tan Mieu (In 1897, the name was changed to Cung Ton Mieu). In 1892, Mrs. Tu Minh Hoang Thai Hau - King Thanh Thai's mother made money to cast a statue of Buddha and expanded the rising house of Tuong Quang pagoda. The next year Thanh Thai king changed the name to Kim Quang pagoda and gave the pagoda a diaphragm. 5 words "Sac Tu Kim Quang Tu".

In July of the 11th year of Thanh Thai , the king allowed to build Long An palace near the tomb of Emperor Duc Duc to worship his father. In this campus, a number of dependent houses such as Ta, Huu muong and Ta Huu were built for the 7 wives of King Duc Duc to live in order to take care of the worship. In 1906, Mrs. Tu Minh died, the court re-planned the area of Emperor Duc Duc's tomb, made a double tomb area, built her tomb near his tomb in the style of "burial", "virtuous".

In late 1945, shortly after Duy Tan died in a airplane crash in Africa, a memorial ceremony for the king was held at Long An Palace and worshiped the king here. In 1954, when King Thanh Thai died, the body was buried at the current place in An Lang area and worshiped at the Long An temple. In 1987, King Duy Tan's remains were buried next to Thanh Thai tomb. Near the two sides of the tomb of Thanh Thai and Duy Tan, there are tombs of 3 Thanh Thai kings' wives. And in 1994, the remains of Mrs. Mai Thi Vang (died in 1980), the wife of King Duy Tan was buried near the tomb of King Duy Tan. Duc Duc tomb occupies an area of 56,144m2, including about 20 large and small architectural works; divided into two areas: tombs and temple, located more than 50m apart. Both architectural areas are built into enclosures. Mausoleum faces northwest, using a low hill, often called Phuoc Qua as a front screen; take the horizontal flow in front of you as an "Minh Đường" - place of vitality, and use the mountain Tam Thai in the back as "Hậu Chẩm" (Hậu Chẩm - a solid support. Again, there must be a long vein, usually a river, or a long lake or pond, the dragon vein must always be opened to keep the prosperity).

Go to the tomb area - an area of 3,445m2 by a fairly large three-door gate made of bricks, on which is a fake roof. Behind the door is Bai Dinh, with no stone statues like other tombs, but only a handrail made of lime bricks for decoration. The center of the tomb is right behind the second gate of the second gate, with Huynh Oc house built on a square base of 8m each. The house is built as a communal house with the ancient form, roof tiles of Hoang Luu Ly. The edge of the ridge is shaped like a dragon and a dragon, and the interior is simply decorated. 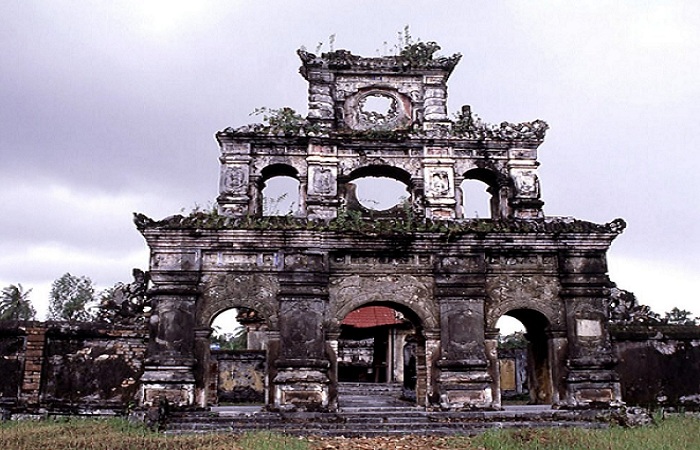 On both sides of this house are two graves of King Duc Duc and Queen Tu Minh lying symmetrically on each other. Tombs are built of Thanh stone, in the style of 5 overlapping rectangular blocks, total tomb height is 0.85m. In front of the 2 graves, there is a screen covered with the words Tho and Song Hy. Outside the tomb area, on both sides are two pillars of brick construction, on the lotus-shaped cover, further away there are forbidden pillars to limit the tomb area. 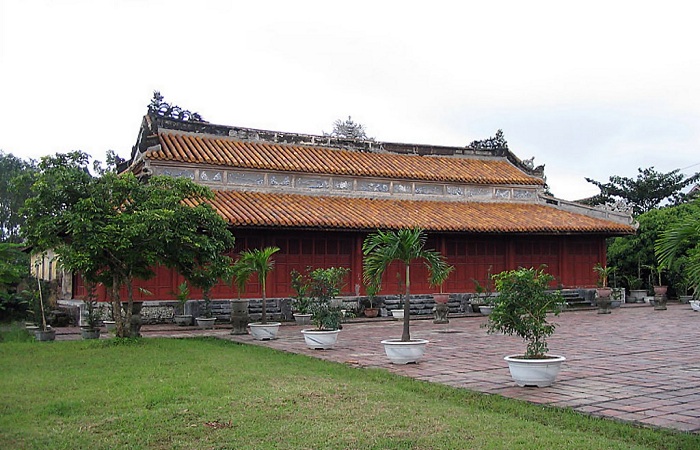 Behind the main gate is the screen, then the Bat Trang tiled courtyard. The center of the worshiping area is Long An Palace, a duplex building with a scallop snail set on a 24.2m x 22.2m floor. The main hall consists of 3 compartments with 2 dual wings, the temple includes 5 compartments and 2 wings with single roof with yellow enameled tile.