Thieu Tri Tomb (Mausoleum of Thieu Tri): Thieu Tri mausoleum is based on Thuan Dao mountain, in the territory of Cu Chanh village, Thuy Bang commune, Huong Thuy district, about 8 km from Hue citadel. Compared to the tomb of the predecessors and successors, Thieu Tri tomb has its own characteristics.

This is the only tomb facing northwest, a direction rarely used in palace architecture and tombs of the Nguyen Dynasty. 8 km from the tomb, the towering Mount Cham is selected as a front screen. The Perfume River flows through the front as a Minh Duong - (From ancient times, Minh Duong was the place where the Kings considered the main court as well as the place where hundreds of mandarins paid homage to the king. At present, Minh Duong in feng shui is the land in front of the grave, the mountains gather around and the veins flow; is the gathering place of vitality).

Even choosing " Left Blue Dragon" and "Right White Tiger" also have unusual features: Vong Canh hill on this side of the river was chosen as "dragon adoration", but "tiger ambush" is the Ngoc Trang mountain on the other side of the river. Behind, Kim Ngoc mountain in the clouds was chosen to be Hậu Chẩm; At the same time, the architects added a large mound of soil right behind the mausoleum to make the second Hậu Chẩm. (Hậu Chẩm - a solid support. Again, there must be a long vein, usually a river, or a long lake or pond, the dragon vein must always be opened to keep the prosperity). 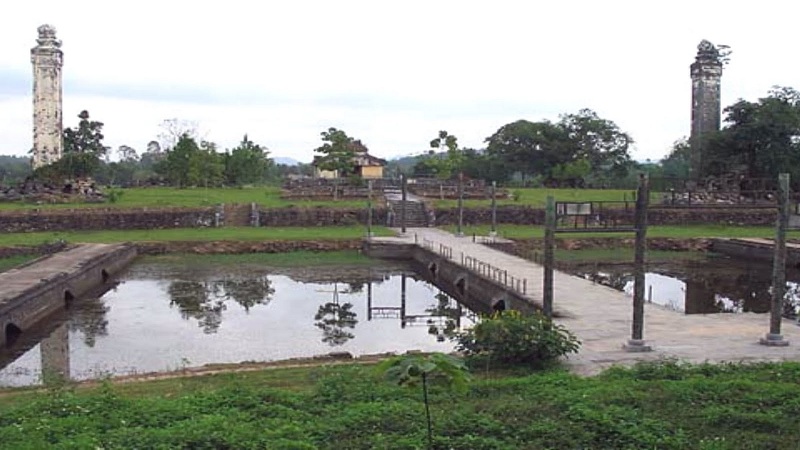 Another peculiar feature is the mausoleum without La Thanh (walls) surrounding. If at Gia Long mausoleum, La Thanh (walls) is made of bricks, it is replaced by countless mountains and hills surrounded by a natural, majestic belt to protect the sleep of the Nguyen Dynasty's emperor. At Thieu Tri Mausoleum, rice fields, the surrounding green gardens are considered La Thanh. It is the nature that makes the landscape of Thieu Tri tombs serene and peaceful.