Dong Khanh Tomb (Mausoleum of Dong Khanh): Dong Khanh is the eldest but is put on the throne last. At that time, when King Hiep Hoa was killed (1883), Ton That Thuyet and Nguyen Van Tuong founded Prince Ung Dang (adopted son of Tu Duc, the second younger brother of Ung Duong) to become King, taking the reign of Kien Phuc. 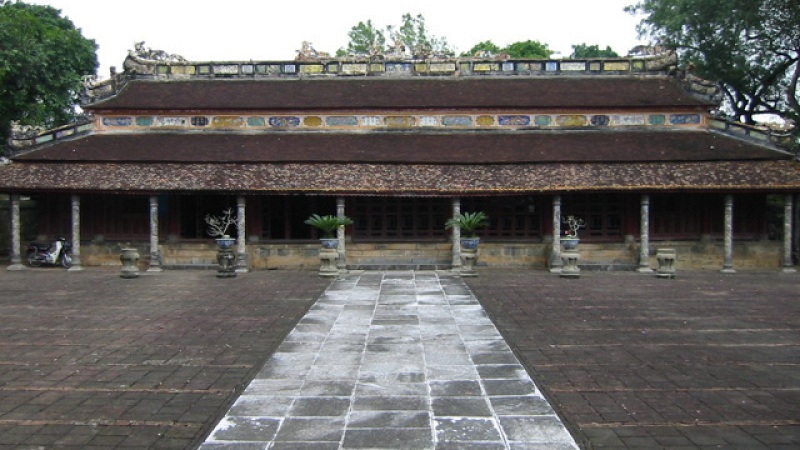 Being on the throne for 8 months, Kien Phuc died, his younger brother, Ung Lich, succeeded him and named Ham Nghi. Ham Nghi ruled for a year, the capital fell (5-7-1885), and he had to leave the capital according to Ton That Thuyet to go to Tan So, broadcast Can Vuong against the French. The courtiers and the government in charge put Ham Nghi's brother on the vacant throne, which is Dong Khanh.

Dong Khanh became a king for 3 years, then died at the age of 25. The king did not expect himself to die so early, so he never worried about his future birth (third life after dead). Dong Khanh Mausoleum exists, actually the place where King Dong Khanh stayed permanently in the temple of his father. The birth of this mausoleum is quite a lot of obstacles.

After he ascended the throne, Dong Khanh found that his father's tomb in Cu Si did not have a temple so he ordered the Ministry of Public Construction to build a temple nearby to worship his father. Dien Tu Tu commenced in February 1888, and completed in October of that year. Dong Khanh took the tablet of Kien Thai Vuong to worship in the temple and at the same time continued to complete the project. However, while the construction work continued, Dong Khanh fell ill and died suddenly.

King Thanh Thai (1889-1907) succeeded in the context of the country facing many difficulties and economic exhaustion, so it was impossible to build a mausoleum and tomb for the previous king, and had access to Truy Tu Temple to change to Ngong Hy to worship the king Dong Khanh. The king's body was also buried simply on a hill called Ho Thuan Son, 30 meters away from Ngung Hy insulation to the west. The whole tomb is called Tu Lang.

In August 1916, after being enthroned for 3 months, Emperor Khai Dinh (1916-1925), the son of King Dong Khanh, renovated the temple and built the tomb for his father. The entire tomb area from Bai Dinh, Bi Dinh to Buu Thanh and Huyen Cung were built under Khai Dinh, until July 1917. Particularly, Ngung Hy and Ta Huu Tung Vien; Ta Huu Tung Tu continued to be repaired until 1923. 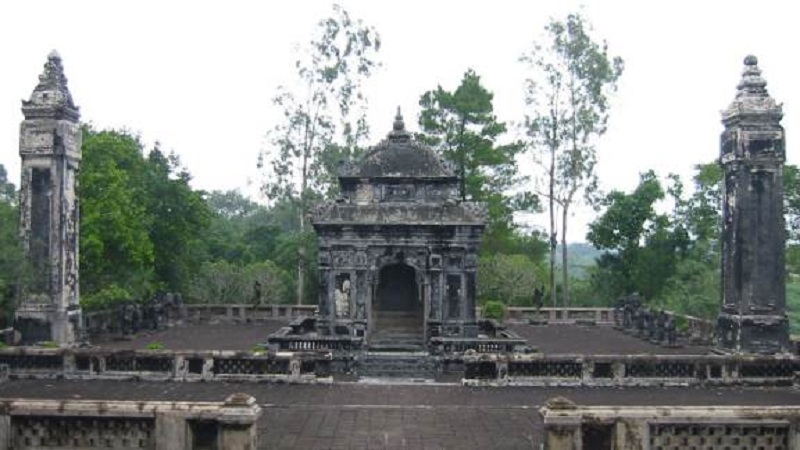 Built in such a long process, Dong Khanh Tomb imprints two architectural types of two different historical periods. If the traditional style really stops in the Tu Duc tomb architecture and the modern style is clearly shown in the later Khai Dinh tomb architecture, Dong Khanh tomb is a transshipment step. The rather isolated existence of the two mausoleums and lentils areas further clarifies this. In the impregnated area, in general, the buildings are still old: the architecture of the palace resembles the snail in the main hall and the dependent houses, still the splendid rows of golden lacquered lacquer pillars with decorative projects. Quartet, quartet ... familiar.

It is noteworthy that Ngung Hy Palace, which is considered to be the most reserved place of the art of gilding lacquer painting, is well known in Vietnam. On the interior plates are a series of cells decorated with topics of apricot blossom, coniferous leaves, bamboo ... with lacquer, mosaic and emboss. Especially in the main hall there are also 24 drawings of the Twelve Quaternary stories about filial examples in China.