Hue Imperial City: 580 × 620m Area surrounded by Wall, reserved for Kings and Royal Family with Living, Working and Worshiping Areas. Imperial City of Hue is located in the middle of Hue Citadel, and to protect the Hue Forbidden City in the middle. 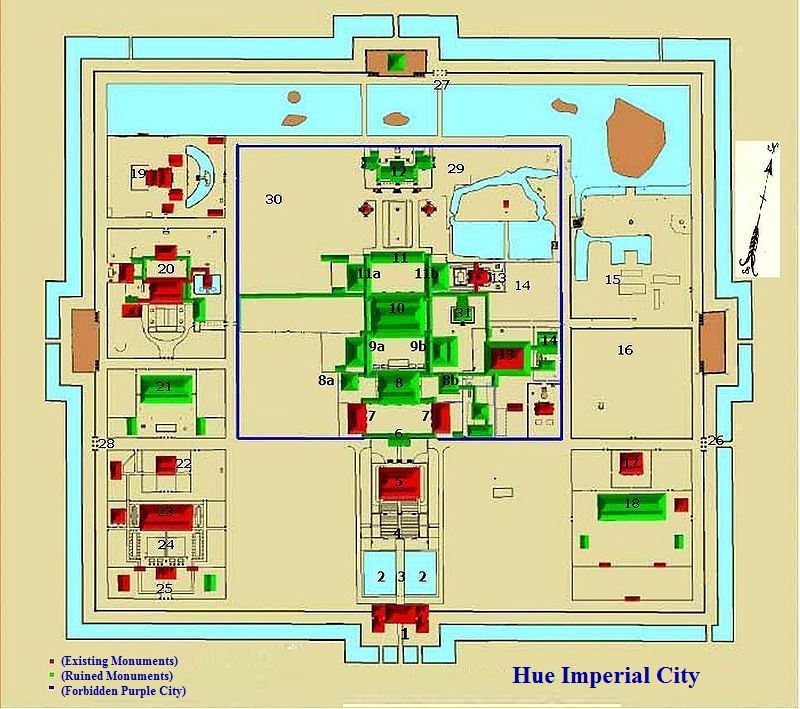 Hue Imperial City is the rectangle area with about 620m X 580m, surrounded by the 0.5m thick wall, which protects the most important places of the Nguyen's Ancestor and the Forbidden City in the middle. Hue Imperial City was certified as a World Cultural Heritage Site by UNESCO in 1993 and is a Remarkable Place for Tourist visiting to an Old Imperial Capital City of Vietnam.

Hue Imperial City was built in 1804, but it was not until 1833 that Emperor Minh Mang completed the entire palace system with about 147 constructions. It has a square ground, about 600 meters each side, built of bricks, 4m high, 1m thick, surrounded by protective trenches, with 4 doors to access. The main door is Ngo Mon (Noon Gate or South Gate), the east Hien Nhon gate, the West has Chuong Duc door, the West has Hoa Binh door. Bridges and lakes dug around the outside of the city are named Kim Thuy.

The Imperial Palace and the entire palace system are arranged on a symmetrical axis, in which the central axis is arranged for kings only. The works on both sides are distributed strictly in each area, following the principle (from the inside out): "describing men and women", "describing martial arts". Even in shrines, there is an arrangement in the "left-right way" (left front, right after, respectively over time).

Although there are many large and small constructions built in the Hue Imperial City area, they are all set in the middle of nature with large and small lakes, gardens, stone bridges, islands and shady perennial trees. year round.

Areas inside the Imperial City of Hue:

- Areas of shrines: arranged in the front, both sides of the vertical axis of the Imperial City in the order from the inside out including:

- The area for princes to study and entertain such as Co Ha garden, Kham Van palace ... (rear, left).

- There are also warehouses (the Interior Office) and royal factories (in front of the Co Ha garden).

- Forbidden Purple City: This area is located on the same north-south axis as the Imperial Citadel and the Imperial City, including a city wall surrounding the palace areas such as:

The monuments inside the Imperial City:

- Ngo Mon (Noon Gate or South Gate): Ngo Mon Gate is the southern main gate of the Imperial Citadel of Hue, which was built in by Minh Mang in 1834. Ngo Mon Gate is literally the Gate facing the South, the largest of the four main gates of the Imperial City of Hue. From the etymological perspective, Ngo Mon means the gate facing the Sunrise, which is also to the South.

- Thai Hoa Palace (Supreme Harmony Palace) and Dai Trieu Court Yard: Thai Hoa Palace is a palace located in the Imperial City area of Hue citadel. The palace, along with the Imperial Court, is the venue for important imperial court ceremonies such as: the coronation ceremony, the king's birthday, the official envoy reception and the court visits. held 2 times on the 1st and 15th of the lunar month. In feudal regimes this palace was considered the center of the country. Electricity was built in 1805 during the reign of Gia Long. In 1833, when Emperor Minh Mang reorganized the royal palace system, it allowed to move the power to the south and make it more massive and gorgeous.

- Dien Tho Palace (Cung Dien Tho): was originally named Truong Tho palace, other names were Tu Tho, Gia Tho and Ninh Tho; was built in 1803 to make a living place of Hoang Thai Hau of the Nguyen Dynasty.

- Truong Sanh Palace or Truong Sinh Place (also known as Truong Ninh Palce), was built in the first Minh Mang (1821) in the Northwest of the Imperial City with the original role as a garden, where the royal kings Nguyen invited his mother to visit the scenery. Later, the palace was converted into a living place for a number of empress queens and empress queens. In its most glorious period, the landscape architecture of the Sanh Truong Sanh Palace was ranked in the seventh rank by the Emperor Thieu Tri.

Hung To Mieu, also known as Hung Mieu, is a temple dedicated to Gia Long's parents (Mr. Nguyen Phuc Luan (or Nguyen Phuc Con) and Mrs. Nguyen Thi Hoan), located in southwest of Hue Imperial City (about 50 meters from The Mieu. to the north).

- The To Mieu Temple: The To Mieu, often called The Mieu, is located in the southwest corner of Hue Imperial Citadel and is the place to worship the Nguyen kings. This is where the court comes to sacrifice the deceased kings, women in the court (including the queen) are not allowed to attend these ceremonies.

- Trieu To Mieu Temple: Trieu To Mieu, also known as Trieu Mieu, was built by Gia Long in 1804. This temple is located in the north of Thai Mieu in Hue Imperial City, a shrine dedicated to Nguyen Kim, the father of Nguyen Hoang - Founder of the Nguyen Family in Hue.

- Thai To Mieu Temple: Thai To Mieu is also known as Thai Mieu is a temple to worship 9 Lords of the Nguyen Family, from Nguyen Hoang to Nguyen Phuc Thuan. The temple was built in by Gia Long in 1804 in the southeast corner of the Imperial City, symmetrical to The To Mieu in the southwest.

- Hien Lam Cac (Hien Lam Pavillion): Hien Lam Cac, built in 1821 and completed in 1822 during the reign of King Minh Mang located in the temple area in Hue Imperial Citadel, 13m high and is the tallest building in the Imperial Citadel. This is considered a memorial to remember the merits of the Nguyen kings and the great ministers of the dynasty.

- The 9 Dynastic Urns: The Nine Urns of the Nguyen Dynasty are located in front of Hien Lam Pavillion, opposite to The Mieu, southwest of Hue Imperial City. All were cast in Hue at the end of 1835, completed in early 1837. Each Urn has its own name corresponding to an Emperor of the Nguyen Dynasty, they have different weight and the carvings outside are also different.

- Phung Tien Palace: Phung Tien Palace, located near Chuong Duc estuary, in front of Dien Tho Palace, the western gate of Hue Imperial City built by King Gia Long and Minh Mang to worship Nguyen kings. Unlike The Mieu, this palace also worships the Nguyen kings and queens, but women in the court are allowed to come here to pay a respect. In addition, it is a place to store many treasures of the Nguyen Kings. In February 1947, all electricity was burned, leaving only Tam Quan Gate and the city walls still relatively intact.

Hue Imperial City is to protect the most important area of the whole country, where Kings, Queen, Wives - Concubines - Eunuchs of the Kings to live named Forbidden Purple City in the middle and This is protected by Hue Citadel outside.