Hue Tomb Guide: If you are history buff and visiting to Vietnam. Hue city is definitely a Must-Visit in your list. It was served as the Last Royal Ancient Capital of 13 Kings of the Nguyen Dynasty (1802 - 1945) and here is the List of our 13 Emperors:

All the Royal Tombs of the Nguyen Emperors were built, planned in accordance with the philosophy of Oriental Feng Shui with: Mountain - Rivers, Mountains in Front for Screen & on the Back for Reclining, Dragon on the Left & Tiger on the Right for Protection,... 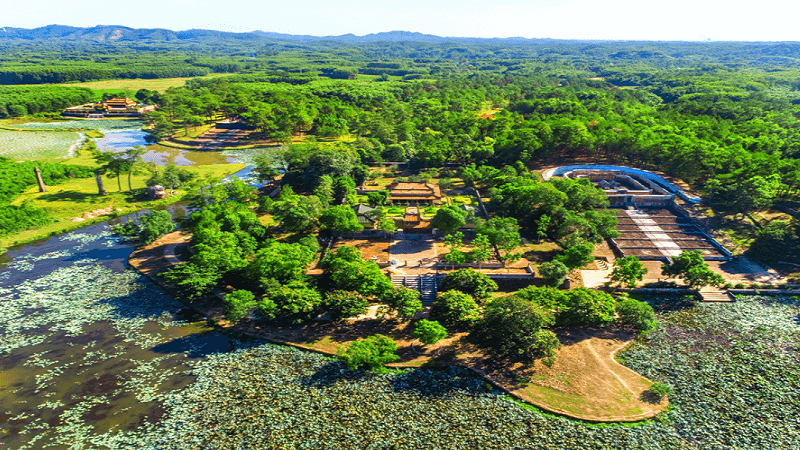 These tombs have very beautiful and poetic architecture. Although the Nguyen Dynasty had 13 kings, but for political and economic reasons only 7 tombs were built. They are now to bury 10 Kings of the Nguyen Dynasty. Below is the list of 7 royal tombs, you can click to see details:

Most of the tombs were destroyed by bombs during the wars or by natural disasters. There is only 1 tomb still remains intact, that is KKhai Dinh Tomb. And among 7 Royal Tombs of the Nguyen Emperors in Hue, there are 3 Best Royal Tombs of Emperor Minh Mang, Emperor Tu Duc and Emperor Khai Dinh. These are also the most popular tombs for local and international visitors traveling to Hue Vietnam and really worth a visit to learn about Vietnamese Royal Culture and History.

How to Get there and what is the Best Ways to visit Hue Tombs of the Emperors?

Hue Royal Tombs are all located in the west of city center because of Chinese feng shui, not far from Perfume River. It is now very easy to get to all of the tombs from city center. There are some suggestions of the most popular ways to travel: by bicycle, take a Grab Bike and Taxi. But the best way is to rent Motorcycle (self-driving or with driver), or Private Car.