Nguyen Emperors tried to built their own tombs when they were still alive, as these would be the summer palaces for some to live and work later. So tombs always include 2 areas: Palace for living and working (became temple after King died) and Burial Area. There were 13 Kings of the Nguyen Dynasty, but because of polictical reason, so there were only 7 tombs were built.

Among 7 Royal Tombs of the Nguyen Emperors in Hue, there are 4 Best Royal Tombs of Emperor Minh Mang, Emperor Tu Duc and Emperor Khai Dinh. These are also the most popular tombs for local and international visitors traveling to Hue Vietnam.

1. Gia Long Tomb (Mausoleum of Gia Long): The mausoleum began construction in 1814 and was not completed until 1820. The entire mausoleum is a mountain complex with 42 hills and mountains, large and small, of which Dai Thien Tho is the largest mountain chosen as a precedent of the mausoleum and is the name of the whole mountain. From the banks of the Perfume River to the mausoleum, there is a wide road on both sides growing pine and melancholy soaring, blue, creating a cool, quiet air. Two majestic pillars are located on the outside, signaling the tomb.

2. Minh Mang Tomb (Mausoleum of Minh Mang): In February 1820, Emperor Gia Long passed away, the fourth prince Nguyen Phuc Dam was put on the throne, taking the title Minh Mang or Minh Menh. As a king for 7 years, Minh Mang sent people to find land to build Tomb for himself. Geography Le Van Duc has chosen a good land in the area of Cam Ke Mountain, near the Bang Lang junction, the confluence of the two rivers of Ta Trach and Huu Trach to form the poetic Huong River. But it took 14 years to consider and choose, until 1840, the new king decided to build his tomb in this place. The king changed the name of Cam Ke mountain (belonging to An Bang hamlet, Huong Tra district) to Hieu Mountain and called the tomb Hieu Tomb.

3. Tu Duc Tomb (Mausoleum of Tu Duc): Emperor Tu Duc ruled our country for 36 years (1847-1883), the longest time compare to any Emperors of the Nguyen's Dynasty. Although he had about 103 wives and concubines, he was unable to have children as he had mumps  when he was 20. Then he had to adopt 3 nephews to become adopted sons. He had wrote about his biography on Stone Stele in Tomb's Area. This stele is the biggest of its type in Vietnam with 20 tons weight, and had to be brought here from Thanh Hoa Province over 500 kilometers away - a trip that took Elephants and Horses four years to bring here. Tu Duc Tomb took 3 years for 3.000 man to work day and night.

Khai Dinh ascended the throne in 1916 at the age of 31. Immediately after taking the throne, he built many palaces, palaces and tombs for himself and the royal family such as Kien Trung palace, An Dinh palace, Truong An gate. Hien Nhon and Chuong Duc gates, especially Ung Lang (Khai Dinh Tomb). 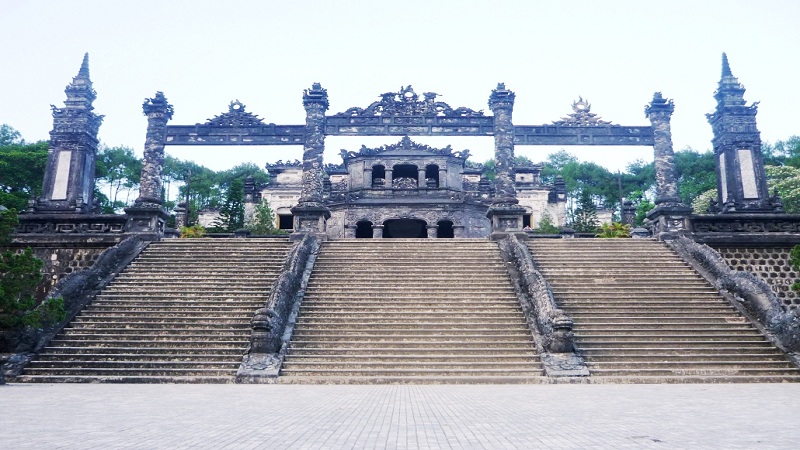 In order to build his tomb, Khai Dinh consulted many reports of geographers who eventually chose Chau Chua mountain as the location to build the tomb. In this position, the tomb of Khai Dinh took a low hill in the front as a screen; taking Mount Chop Vung and Kim Son mountain to make "Left Blue Dragon" and "Right White Tiger"; There is a slot from Châu Chu that flows from left to right to create a "water seal", called "minh minh". 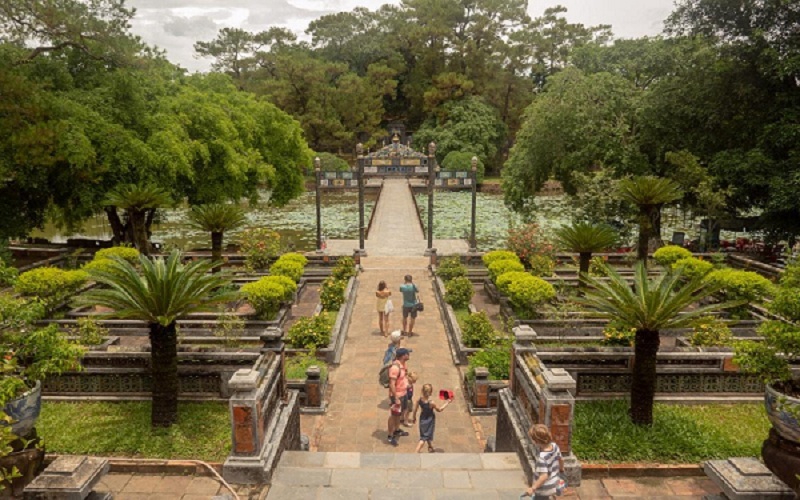