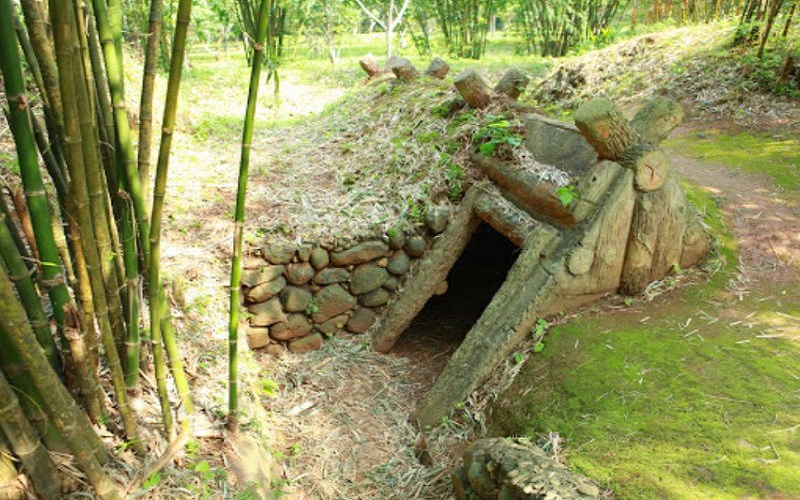 The Vinh Moc Tunnel system existed in the north of Ben Hai river (known as parallel 17th - this was the border between North and South Vietnam) and Hien Luong bridge during the years 1965-1972.

In 1954, Ngo Dinh Diem's Republic of Vietnam government did not respect the Geneva Agreement, and did not conduct the general election as intended. Along with attacking insurgent movements in the South, the US tried to provoke with the Democratic Republic of Vietnam, whom were protecting the borderline in Vinh Linh. In 1965, the US created the Gulf of Tonkin event to start the war to the North by air force, of which Vinh Linh was the top target of raiding.

During the years 1965 - 1972, Vinh Linh was continuously raided with a total of more than half a million tons of bombs of all kinds. On average, every citizen here suffered 7 tons of American bombs.

The first tunnel appeared in Vietnam since 1947 in the area of Phu Tho Hoa (now in Tan Binh - Ho Chi Minh City). Then, from 1961 to 1965, the tunnel system appeared in 5 communes. At the end of 1963, Mr. Tran Nam Trung from the Central Committee of the Communist Party in South Vietnam on his way to the North visited the war zone in Vinh Giang commune (Vinh Linh). After observing the topography and geology here, he suggested Vinh Linh should dig the tunnel like in Cu Chi. 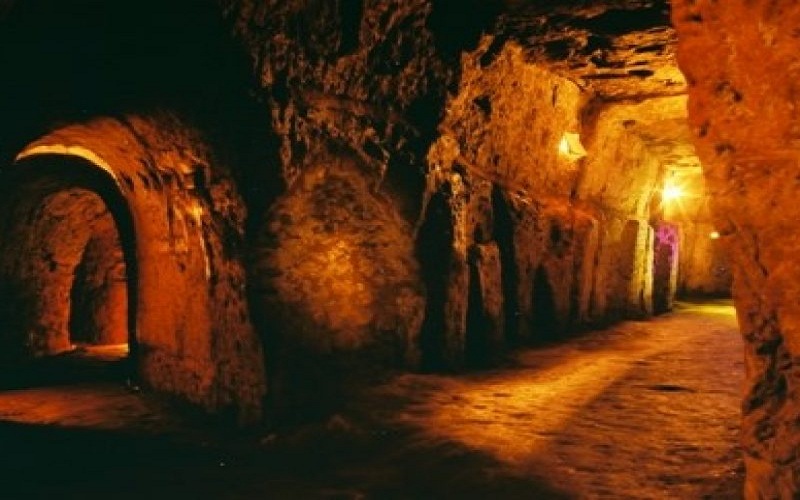 With the motto: "An inch does not go, an inch does not leave. Each village is a fortress", through the instructions of the Vinh Linh Party Committee, the head of the People's Armed Police Station 140 Le Xuan Vy pointed out local units and people were quick to conduct tunnel excavation. The work was started in early 1965 and was completed on February 18, 1966. The special thing is that the commander of this project Le Xuan Vy (the engineer) at that time was just finished primary school, and the most modern tool in his hands was an old compass. Currently, he is a former lieutenant colonel in the age of 85 living in Dong Ha city and blinded by the effects of war wounds.

To ensure that hundreds of people to live safely and conveniently in the tunnel. Many apartments were built, each apartment has enough space for three to four people. In the tunnel there were three wells, a hall (with a capacity of 50 people), a clinic, a maternity room, a surgery station, a Hoang Cam kitchen, a rice warehouse, a telephone station, ...

Two sides of the main road, three to five meters apart, dug deep into a small tunnel, used as a living place for a family. The tunnel was made up of three floors. The first floor was 12 to 15 meters deep from the ground, which is a fighting and temporary shelter.

The second floor was 18 meters deep, which was the living place of the people, was located the headquarters of the Party Committee, People's Committee and Military Command. The third floor, 22 m deep, was used as a logistics warehouse to supply Con Co Island and serve the fight of the Bay Moc militia and people, to hide food and weapons.

According to statistics, up to 18,000 working days were mobilized to dig Vinh Moc tunnel in two years. This tunnel was dug in basaltic red soil since 1965 and completed two years later, in 1967 with a total length of more than 2,000 m. Every 4 m has a family apartment, 0.8 m wide, 1.8 m deep, used for 4 people. The air makes the clay inside the tunnel more and more rigid, so it remains almost original to this day.

Even the deepest floor, 23 m is still 3 m above sea level, so all activities in the tunnels are normal during the rainy season. The entire Vinh Moc tunnel system has 13 doors to the outside, including seven doors to the sea, six doors to the hills, each of which is considered a vent. The entrances were fitted with anti-collapse wood and are regularly reinforced to prevent landslides. Tunnels residents rarely went out. They only went out in times of need, sometimes in no danger.

The underground life lacks light, is humid in the winter, hot in the summer, the hygienic conditions are not guaranteed, so most of the tunnel inhabitants are parasites, silver skin and bone diseases. , eyes. Underground life is not suitable for people, always lack of light. Most of the tunnel villages save on lighting materials such as kerosene, grease, only when necessary, such as meetings, emergency services for patients, infant care ... use lights. In addition, the shortage of food, food and other necessities is also the biggest problem for the tunnel residents.

Ordinary life has existed for many years in the earth with all concepts of life such as studying, playing, entertainment, love, giving birth [4] ... in a space of 1.8 m of the tunnel.

In order to safely maintain the race, to have a descendant, families, ethnic groups and inhabitants of Vinh Moc Tunnels must divide and live in many different tunnels. During the time living in the tunnel in Vinh Linh in general, there were 60 children being born, only Bay Moc Tunnels had 17 children born in the tunnel. The tunnels were inhabited by people during the war years, with the largest population of about 1,200 people. For nearly 2,000 days and nights in the tunnel, no one was injured and 17 babies were born, enough to say the value and meaning of Vinh Moc tunnel. There are many basements created for childbirth and childcare homes

In the reality of fierce war, many tunnels were not strong enough, difficult to meet the requirements of staying, fighting safely for people on the borderline, there were many loss of life. Typically, on February 26, 1967, Don Due Tunnels (Vinh Hoa) was destroyed by American bombs, killing 4 people; June 20, 1967, Tan Ly Tunnels (in Vinh Quang) collapsed, causing 61 deaths; July 27, 1967, the Xom Boc Tunnels (in Vinh Thach) collapsed with 22 deaths, the Binh Minh Tunnels (in Vinh Hien) collapsed on September 10, 1967, killing 39 people ... Drawing on that experience, Vinh Moc Tunnels were more solidly and logically arranged, so there are no human losses during the war.

If you traveling from Hanoi and North Vietnam to Vinh Moc. Take the train to Dong Ha City then hire a private car/Taxi from Dong Ha Train Station to driver to Vinh Moc Tunnels (about 37km away). It is up to you to stay overnight to Dong Ha City or driving to Hue City after discovery to the tunnels.

If you traveling from Hue City, you can book Hue DMZ Private Tour Half Day or Rent a Private Car to drive you to Vinh Moc. Then it depends on your plan to go back to Hue, stay in Dong Ha City or take overnight train and open bus to Hanoi on the same day.