Yok Don National Park Vietnam: Everything You Need to Know 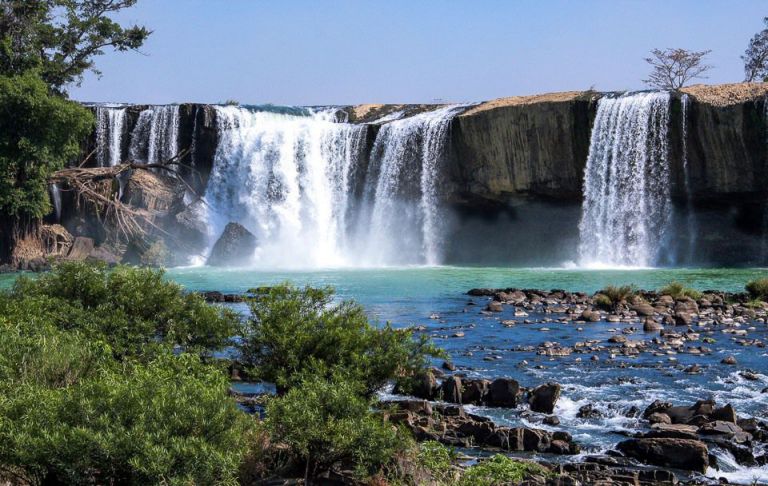 Yok Don National Park is flat area with an elevation of 200 m with lowland landscape dominated by dry forest studded with seasonal pools. Semi-evergreen forest can also be found in the national park along watercourses.

There are also several ranges of low hills within the national park; the highest peak is the eponymous Mount Yok Don at 482 m in the south-eastern range. Yok Don National Park is bisected by the Srepok River- a major tributary of the Mekong River in Vietnam. The two largest streams in the area, the Dak Ken and Dak Na, are ramified to a series of interrupted pools during the dry season.

•    Vegetation in the national park:

The vegetation in the national park of Yok Don is dominated by semi-evergreen (mixed deciduous) forest and deciduous forest, with smaller areas of evergreen forest, particularly on the hills and along watercourses areas.

The deciduous forest of national park contains members of the Dipterocarpaceae family, including Dipterocarpus tuberculatus, D. obtusifolius and Shorea obtusa. Combretaceae, Anacardiaceae, Fabaceae and Myrtaceae families are also well represented. The canopy of this forest type is open and most of the trees have thick, fire-resistant bark.

Fifferent to the deciduous forest, the semi-evergreen forest in the area has a closed canopy and is stratified into five layers. This forest type is characterized by the presence of Shorea cochinchinensis, Lagerstroemia calyculata and Anisoptera scaphula.

Evergreen forest has a limited distribution in Yok Don National Park, being confined by the higher elevations of the hills in the south-east of the site. This forest type is a bit denser and is dominated by members of the Fagaceae, Sapindaceae, Euphorbiaceae, Ebenaceae and Meliaceae families.

•    Flora in the national park

Due to deciduous forest generally supports a lower floral diversity than evergreen forest, the diversity of plant species at Yok Don National Park is lower than that at other national parks in Vietnam. According to Anon (1998), 474 vascular plant species have been discovered at the national park, of which 28 are already listed in the Red Data Book of Vietnam. National Park of Yok Don is considered to be one of the seven internationally important Centres of Plant Diversity in Vietnam.

•    Fauna in the national park

National Park of Yok Don has a reputation as an important site for the conservation of large mammals in Vietnam. Indeed, scientists had confirmed the continued occurrence of asian elephant elephas maximus, banteng B. Javanicus, gaur bos gaurus and tiger panthera tigris at Yok Don National Park.

The National Park is also one of handful areas in Vietnam with recent records of white-rumped and red-headed vultures. However, most of these records are from the western part of the national park, close to the Cambodian border, and to be closed to visitors.

3. What is the Best Things to Do in Yok Don National Park?

An ideal trekking activity should be planed for 3 days and can be started from Buon Ma Thuot airport to the park. After that you can trek deep into the forest in order to contemplate the variety of fauna and flora system. Then, go to Dak Lau stream, visit Srepok River to enjoy the stunning landscapes where hold so many bird species. You can also visit Yang Lanh village and immerse yourself in the diverse traditional cultures of different ethnic groups such as Laos, M’nong and Ede.

Elephants in Yok Don National Park used to ride heavy baskets on the backs to wait for tourists. But they have now a more comfortable life to roam in the safe forest. If you visit to the park, you may have chance to see many elephants bathing in mud, water and dust. They are all wild free to nature, you can get close to them in the safe distance to take phôts without worrying about your safety.

If you love to watch a number of different birds in Yok Don National Park, you should wake up early in the morning. Trek into the forrest, then you can find the best bird-watching areas. If you are lucky enough, you will have an chance to spot even some rare species like bee-eaters, green peafowl, yellow-footed pigeon, oriental-pied horn bill, Rufus tree pie and so on.

4. Where to Eat in Yok Don National Park?

There are numerous local restaurants serving delicious food near Yok Don National Park for tourists to enjoy. Here are some Best Restaurants to Eat:

5. Where to Stay in Yok Don National Park?

6. When is the Best Time to Visit Yok Don National Park?

The very best time to visit Yok Don National Park is on the dry season, which is in between October and April following year. This is the time with pleasant temperature, the forests are lush and the tourism activities to ofered are varied. You will get the best wild life experience ever whether you choose a bird watching or a mountain hiking here.

Yok Don National Park Vietnam: Everything You Need to Know