Con Dao National Park comprises of 16 islands of different sizes in Ba Ria – Vung Tau Province in the South of Vietnam. This is one of two national parks in Viet Nam owing both marine and forest protected area. National Park of Con Dao is centered on an archipelago of 14 islands with the largest one is Con Son. The topography of Con Son Island is mountainous, and that is dominated by a granite ridge which runs from the south-west to the north-east, sheltering the water bays on both sides of the island from strong winds. 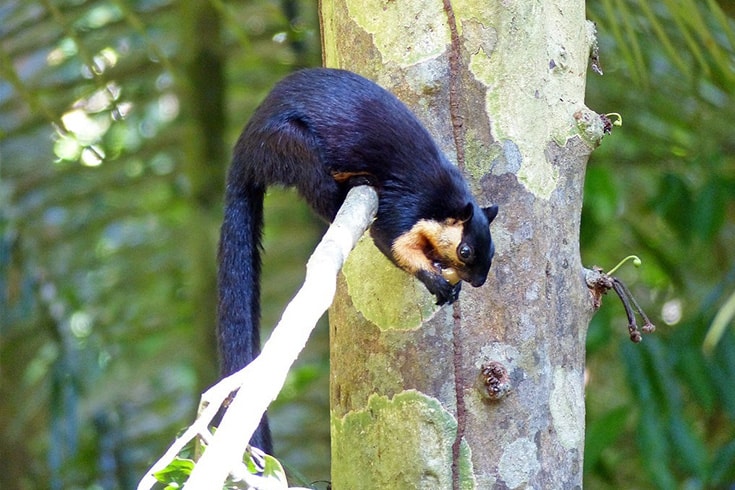 The highest peaks on the island are Mount Thanh Gia and Mount Chua, at about 577 and 515 m respectively. The smaller islands reach a maximum elevation of about 200 m.

Furthermore, the aqui herbosa ecosystem, geophytes in sea water estimate about 200ha, comprising of 9 species (among 16 species in the world). The sea on Con Dao is a home of tortoise-shell, turtle, black whale, and especially dugong, some of the extremely rare species in the world.

Despite the number of species is relatively low, the density of individual species is usually high such as black giant squirrel and ratufa bicolor condorensis. The bird fauna of the park is diversified with red-billed tropicbird phaethon aethereus, nicobar pigeon caloenas nicobarica, pied imperial pigeon ducula bicolor and masked booby sula dactylatra.

The marine ecosystems at Con Dao Ntional Park include mangroves, coral reefs and seagrass beds. Mangroves cover a total area of about 15 ha, and distributed around the Ba Island and along the west coast of the Bay Canh Island, and along the south and north coasts of Con Son Island.

The coral reefs at Con Dao National Park are among the most pristine in Vietnam, and are usually distributed in shallow waters around the islands, covering a total area of about 1,000 ha.

The World Wide Fund for Nature has been protecting sea turtles and dugong in National Park of Con Dao. Since 1995, there are about more than 300,000 baby turtles, that have been released to the sea and nearly 1,000 mature turtles in here have been tagged.

National Park of Con Dao is now considered as one of the best examples of Vietnam's marine conservation with very strict regulations to limit local fishing activities and prohibit the destructive fishing. There are some plans for eco-friendly development within the boundaries of national park..

4. What is the Best Things to Do in Con Dao National Park?

When traveling to Con Dao National Park, tourists should not miss trekking activity in the jungle trails, scuba diving to see coral reefs and take a walk along white sandy beaches. Also, you can rent a scooter or motorbike if you want to have your own trip in this area, that will bring you a chance to explore every corner of Con Dao national park.

5. Where to Stay in Con Dao National Park?

There are plenty of hotels, motels, resorts and homestays in Con Dao Island, depending on your liking and budget. You can choose the most suitable one for you, your family and friends. Here are some of the best recommendations for you:

6. Some Tips for Tourist when Visiting Con Dao National Park:

•    You do need to get permission from the management office in Con Dao District before exploring the national park
•    If you go forr hiking, do not forget to bring some waters in case you are thirsty because of the extreme humidity in the national park
•    Go in a group with friends and not alone, even if you are a good and experienced trekker.