Saigon Reunification Palace (Independence Palace) (Vietnamese: Dinh Thống Nhất) is recorded as an authentic landmark of Ho Chi Minh City (Formerly Saigon) and having in itself the pith of Eastern culture.

The History of Reunification Palace (Independence Palace) was dated back in the French War in Vietnam. In 1858, French first time attached Danang City, then 10 years later in 1868 the French took over 6 provinces in the South of Vietnam including Bien Hoa, Gia Dinh, Dinh Tuong, Vinh Long, An Giang and Ha Tien. 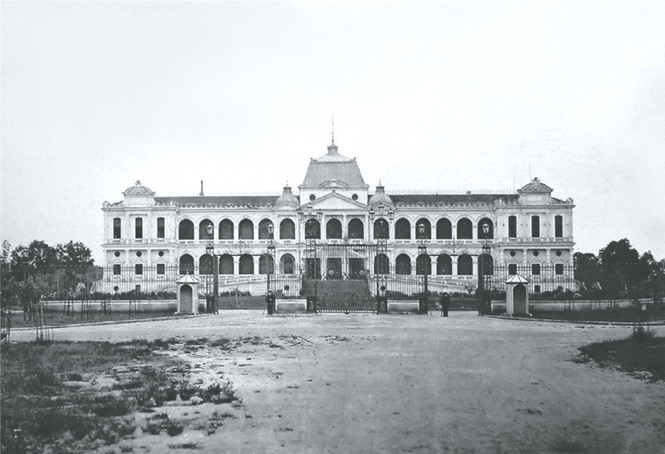 In 1868, the French Colonialists started to build a residence for the French Genaral Governor of Cochinchina in the center of Saigon. Aftert the construction was completed, it was called Norodom Palace (Name of Combodian’s King).

The Norodom  Palace was completed in 1871, and from 1887 to 1945, many French genaral governors had used this palace to live and work during the Indochina invasion. By 1945, the Japanese won over French and monopolized Indochina, Norodom Palace belonged the control of the Japanese government in Vietnam. 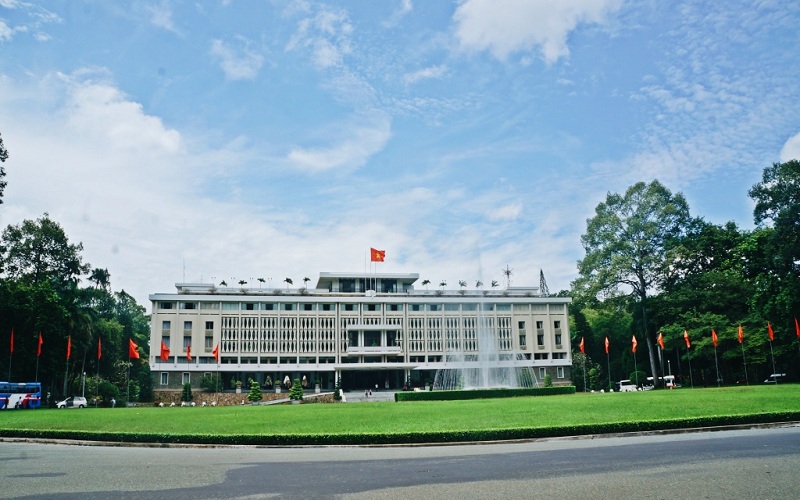 But after the 2nd World War, Japanese was defeated by Communist People then Ho Chi Minh Started Democratic Republic of Vietnam. In 1946, French came back to fight again Communist Government until 1954, the French colonialists was defeated by Communist in the Dien Bien Phu. Vietnamese and French signed the Geneva Agreement, and French had to leave Vietnam. The Norodom Palace was passed to Saigon government on September 7th, 1954, Prime Minister Ngo Dinh Diem decided to change the name of Norodom  Palace into Independence Palace.

In 1955, Ngo Dinh Diem defeated South Vietnam Governor (who used to be the last King of Vietnam: Bao Dai) and became the first president of Vietnam. Independence Palace became the living and working office for South Vietnam President and His Family.

In 1962, The Norodom Palace was bomed and destroyed more than half of the left side by the protesters, so Ngo Dinh Diem had to rebuild the place. But during construction, Ngo Dinh Diem and his brother were asasinated in 1963. In 1964, after the construction finished, this became living and working office of other South Vietnam’s Presidents.

After Ho Chi Minh campaign led by Communist in 1975, Vietnamese Communists gained their victory and reunite the whole country, Independent Palace changed its name into Reunification Palace as it is nowaday.

Besides the absolutely outstanding architecture of the Construction, visitors also have chance to see the unique artifacts displayed inside and outside of the Reunification Palace (Independent Palace). The artifacts here can be divided into two categories: historical artifacts and artworks.

The historical artifacts in Reunification Palace (Independent Palace) represent for the heroic history of Vietnam. The objects are well-preserved and held in perfect shape, in order for visitors to watch and admire.
•    The historical helicopter: On the roof of Reunification Palace (Independent Palace), there is a display of the UH-1 helicopter of President Nguyen Van Thieu, adjacent to the location of two bombs that pilot Nguyen Thanh Trung threw exploded.
•    The German Mercedes: The German car Mercedes Benz 200 W110 which has the number plate VN-13-78. This was one of the cars of President Nguyen Van Thieu of Vietnam.
•    The Jeep: The Jeep M152A2 was used by the Revolutionary Forces. The car is special because it used to serve the last President of Vietnam regime – Mr. Duong Van Minh, and took him to Saigon radio station, where he read the declaration of surrender on April 30th 1975.
In addition, there are modern vehicles used in the Vietnam War such as e 390, 843 tanks and F5E fighters. All of these artifacts contribute to making Thong Nhat Palace become a more attractive tourist destination in the hearts of tourists.

Not only the historical artifacts, but the Reunification Palace (Independent Palace) also displays various valuable works of art.
•    The oil paintings: There is an oil painting depicting the Vietnamese countryside, drawn by architect Ngo Viet Thu. There is also another oil painting of the sisters Thuy Kieu and Thuy Van when they first meet Kim Trong on the day of Ancestors Day(also known as Festival of Tending Graves).
•    Pottery: There are dozens of ancient Chinese pottery pots during the Ming and Qing period in the Reunification Palace (Independent Palace).

The Reunification Palace (Independent Palace) is nestled in District 1, which is also the center of Ho Chi Minh City and close to other tourist attractions such as Notre Dame Cathedral, 30/4 Park, Central Post Office, etc.

Tourists just need to remember that the front gate of the building faces the intersection between Le Duan Street and Nam Ky Khoi Nghia Street. In case you can’t find the right address, look for this three-way intersection.

Ask any local people for direction if you travel on your own on motorbikes, buses or on foot. If you are staying at a hotel in District 1, it will only take 15 to 20 minutes to walk to the Reunification Palace (Independent Palace). If don’t want to spend time looking for direction, they can call a taxi and tell the driver to take them to Independence Palace. The building really stands out on Saigon streets, so you can recognize it easily.

For those people who try to save money by traveling by bus, there are some certain bus numbers to travel, such as:

The historical monument named Independence Palace is opened to visitors at all day of the week, as well as holidays or New Year’s Eve. So one can visit the Palace at any time of the year. But visitors should consider coming to the Palace on special days, such as New Year’s Eve or the Independent Day (September 2nd), because the place will be more lively than usual.

Because the Reunification Palace (Independent Palace) is an honorable place bearing the heroic history of Vietnam, so when visiting, visitors need to strictly follow general rules of the management of the monument, as follows: