Hoi An officials said that in the initial phase, 100 bicycles will be available at 11 docking stations. Another 160 bikes and 10 stations will be added next month.

Users unlock the bikes by downloading a smartphone app. They can ride the bike for free for the first 30 minutes each day before returning it to a docking station of their choice.

A charge of VND20,000 (86 cents) an hour will be applied after the free period, which can be paid for with the app’s payment system or by purchasing coupons at various sales points in town. A full-day rental will cost VND200,000.

Hoi An deputy chairman Nguyen Van Son said at the launching ceremony that the project aims to encourage local residents and tourists to use bicycles for everyday transport to preserve the environment and image of the town, a popular travel hotspot in central Vietnam. 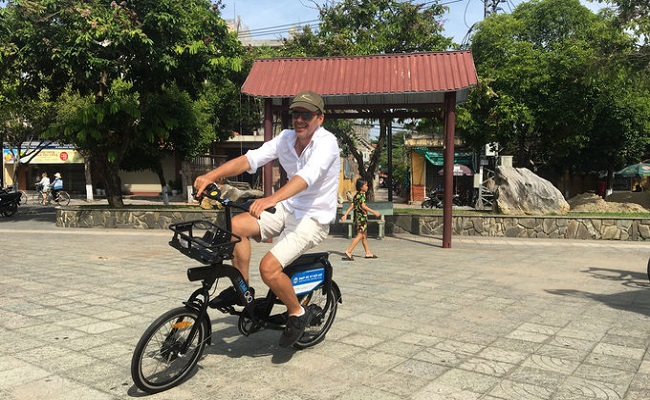 Users unlock the bicycle by a smartphone app. Photo by VnExpress/Dat Nguyen

A new bicycle sharing service in Hoi An allows users to unlock the bicycle with a smartphone app. Photo by VnExpress/Dat Nguyen

The initiative comes as Hoi An sees its bicycle population reduce and that of motorbikes rise in recent years.

It is estimated that bicycles accounted for only 4 percent of all vehicles in Hoi An by 2017, a steep fall from 44 percent in 2012, according to Car Free Day Japan.

There are about 45,000 motorbikes operating in Hoi An, and 5,000 new ones are registered each year, according to local police figures.

The project, organized by Hoi An authorities, HealthBridge Canada and the German Development Cooperation (GIZ), seeks to offer a more sustainable and environmentally-friendly transport alternative.

Jorg Ruger, first secretary of the Germany Embassy in Vietnam, said that the project gives people another sustainable transport option in a town where most hotels let their guests rent bicycles.

"People could give it a try and decide which renting system is best for them. The idea should not be to have only one company to serve everyone, but to have different solutions at the same time.

The bicycles are provided by QIQ, a Singapore-based green mobility sharing company. The firm previously launched a similar bicycle sharing scheme in Hanoi.

With narrow streets that are not suited for buses or other big vehicles, Hoi An is considered an ideal location for bicycles.

The town has been a pioneer in the country since 2004 for ensuring pedestrian-friendly streets. Motorbikes and cars are banned from the town center for large parts of the day – from 9 a.m. to 11 a.m. and from 3 p.m. to 9:30 p.m.

Accommodation reservations provider Agoda recently said Hoi An was one of world’s six best places to explore on bicycles.